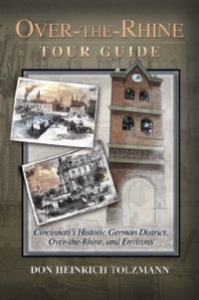 Dr. Don Heinrich Tolzmann, long associated with the University of Cincinnati and German-American studies, is someone who I am aware of but have never met. When I saw his book, Over-the-Rhine tour guide : Cincinnati’s historic German district, Over-the-Rhine, and environs, I had to buy it. I am more than aware of Cincinnati’s Over-the-Rhine neighborhood. My paternal grandparents lived there for over 50 years. I lived there for a year in addition to all the time I spent at my grandparents. When I was completing my BA in history I wrote my capstone paper on the history of the neighborhoods economy. I have always been big fan of the neighborhood and would argue with anyone, everyone that has referred to it as “blighted”. It was just having some hard times.

That is not the case today. The city is investing in a new streetcar line, the neighborhood is gentrifying, business are opening, and homes are being remodeled and, thanks to the entire neighborhood being listed on the National Register of Historic Places in 1983, 943 buildings in all, it is like stepping into an old European town. It is again becoming what Jane Jacobs called a “livable city” and it is filled with history. Not all the history is good but it is all worth remembering. That is why I had high hopes for this guide.

Over the Rhine is defined by the route of the old Miami-Erie Canal, now Central Parkway, so I was a little concerned when he started the guide outside the neighborhood. Dayton Street, old mansions that belonged to the families that owned the breweries and old brewery buildings along Central Avenue (originality in naming streets is not a quality Cincinnati is known for) seemed to be a reasonable inclusion but i grew concerned when the tour entered the neighborhood on Elm Street and failed to even note the YMCA building on the north west corner of Elm and Central Parkway. It is an impressive example of early 20th century architecture and as the early home of both the Salmon P. Chase Law School and a program to train auto mechanics it has history that should be mentioned.

I did learn a lot from the book. Tolzmann was very good at giving the history of the impressive 19th century churches that I admired since my childhood but, until now, knew very little about. He describes several important residences in the neighborhood, stories I had never heard, from serial killers to Civil War generals and politicians.

Unfortunately the tour spends more time outside the neighborhood, I think the surrounding areas were given as much attention as the neighborhood itself was. Some of the points of interest were relevant to OTR, Mecklenburg Gardens, the resort at the top of the Elm Street Incline for one, but most were less interesting than overlooked locations inside the neighborhood. Some connections were overlooked, the Main Street incline was built to take people from OTR to the Zoo, why not mention it with the zoo or use it to introduce the zoo? The Freie Presse building, a German language newspaper that served the overwhelmingly German population of OTR and Cincinnati in general from 1874 until 1964 still stands just south of OTR at 905 Vine Street. Several other locations in the vicinity are covered that have less relevance to OTR. Why not the Freie Press?

The most disappointing feature of the book was the route of the tour itself. Often the path Tolzmann follows doubles back on itself making for needless confusion. The neighborhood vast majority of the buildings are on the seven north south running streets or the three major east west connectors, How difficult would it have been to simply work in a grid, up one street and down the next?

I have to confess that part of my disappointment with the book could be that it scooped me. Researching my capstone paper the thought of an online tour kept popping into my mind but, I studied history not programing. For the few people that will be interested in the topic this book is a good resource. I just wish it was a better one.

Eddie Glaude’s “Democracy in Black” convinced me of one thing I have long suspected. The best decision I ever made was to be born white and male. Except that I never made that decision, no one does, so why on Earth should I profit from it? Why in a nation formed from Thomas Paine’s “Common Sense” argument that heredity proves nothing, not even the son of a King can be counted on to be a good leader, or even a good man. But it does. Thanks to my fortuitous choice of parents I can drive a little sloppy, I have been able to count on finding work when I need it, I can be disrespectful to a police officer and live.

Although when I requested to review this book I expected more of a history than an essay it was definitely not a disappointment. Glaude exposes the way things are in a blunt manner that I think we should hear more. He explores enough modern history to make it clear who he means when he discusses black political leaders and how they have allowed their focus to drift away from improving the community to self improvement and ego building. Then he exposes, explains, how the black community has disintegrated. Thanks to this there is no training ground for new leaders to develop who can unite the community and lead them to rise to the challenges of our times. I would point out that the same community disintegration has happened in the white community but that is not the topic of this book.

The main topic is what I alluded to in the first paragraph. The unfortunate fact that in the United States white lives are believed to matter more than the life of any person of color, most obviously the lives of black men and women. I understand the history of how our color, or lack of it, has been used from Colonial times to divide and control the work force but I am always amazed at how many people that look like me buy into it. I am not rich and I am not good looking but the (lack of) color of my skin is not the only thing I can be proud of. How pathetic are those who only have that lack of color as evidence of their own worth?

Glaude was adamant that the attitude that white lives matter more needs to change but he was relentless in pointing out the failures of past attempts to change America’s attitude on “race”. When he pointed out that the leaders of Ferguson’s protests had no faith in the power of the vote I started to lose hope. Thankfully he managed to find some reason to be optimistic by the end of the book. Unfortunately it will not be easy to finally get to where all Americans act as though they believe these words from the Declaration of Independence, “We hold these truths to be self-evident, that all men are created equal, that they are endowed by their Creator with certain unalienable Rights”